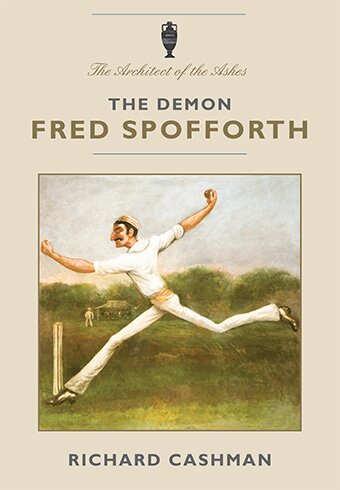 THE DEMON FRED SPOFFORTH
THE ARCHITECT OF THE ASHES

With a Foreword by Geoff Lawson OAM

Since the first edition of this book in 1990, accolades have continued to be showered on the Demon Fred Spofforth. Much new information and many images have also come to light, partly due to digitisation but also because of the subsequent publication of biographies of other leading pre-1914 Australian bowlers. These works raise new questions as to whether Spofforth’s lofty standing as an innovative and influential fast bowler is warranted.

Spofforth’s reputation is secure however, because he helped make international cricket popular, being the architect of the Ashes and taking the first Test hat-trick. He was the archetypal big-time performer who helped Australia develop a winning cricket culture. The many cartoons of Spofforth also suggest that he reached deeper into popular culture than any other cricketer of his time, thereby promoting the popularity of the game at a crucial point in its history.

‘Cricket has always been changing … but the players have been clever and scheming – none more so than the Demon Fred Spofforth – and the battle between bat and ball, batsmen and bowlers … has ensured that the game moves on. Fred Spofforth was not just a cog in the wheel of cricket change, he was an engine.’

Richard Cashman has had an involvement in ten cricket publications, two of which won the Literary Award of the Australian Cricket Society. As the manager of Walla Walla Press he has published a number of cricket works including biographies of Jack Marsh and Tibby Cotter. He has also written many books on Australian sports and Olympic history, including a history of Australian sport entitled Paradise of Sport. From the late 1980s he was secretary, and is a Life Member, of the Marrickville-Pagewood Cricket Club and has played cricket for the University of New South Wales. He is an Adjunct Professor at the University of Technology, Sydney.

* Winner of the ACS Literary Award