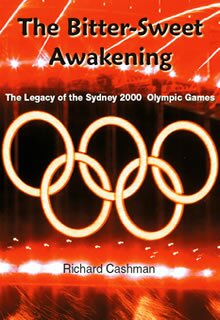 Published in conjunction with the Australian Centre for Olympic Studies, UTS

You can also purchase, as .pdf files, individual chapters of The Bitter-Sweet Awakening: The Legacy of the Sydney 2000 Olympic Games for $10 each, or the entire book for $50, through secure PayPal.

Has the reputation of the Sydney Olympic and Paralympic Games been sustained? Have the long-term impacts of the Games been positive or negative? Have the promised benefits to the host community been realised?

There has been increasing recognition of the importance of the impacts of mega sporting events and in 2001 the International Olympic Committee initiated its Olympic Games Global Impact Project. The Bitter-Sweet Awakening is the first book of its kind, a broad-ranging analysis of the impacts of one particular Olympic and Paralympic Games.