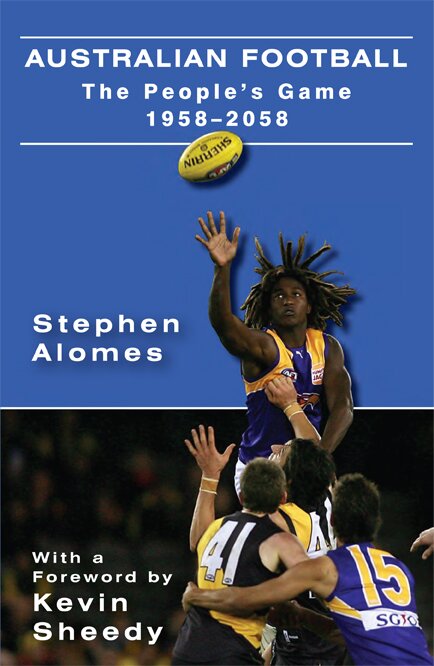 With a Foreword by Kevin Sheedy

Despite the dire predictions of doomsayers that Australian Football could be dead in 50 years, this book demonstrates that the Australian game is thriving and will prosper in 2058. It celebrates ‘the finest form of football … the most athletic to play and the most exciting to watch’, as described by English cricketer C.B. Fry. It shows how the people’s game can remain Australia’s leading sport and compete effectively against global culture and sportainment.

The first book to present Australian Football in the widest panorama over time, it evokes the eras of Barassi and Baldock, Brereton and Ablett and Franklin and Naitanui, and explores the future.

‘If you love Australian football, its past, its present and its future, then you have to read this book’ (Kevin Sheedy, coach of Greater Western Sydney and former coach of Essendon).

Stephen Alomes went to the footy before he went to school. Since then he has played, at the lowest level, and written articles on Australian Football and books on Australian expatriates in London, nationalism, Australia and France and Australia and Japan. He last played in the Sugadaira Cup in Japan in 2000. A writer, broadcaster and painter, he is an Adjunct Professor in the Globalism Research Centre at RMIT University.

1. The People’s Game: ‘That’s the Thing about Football’

2. The Times They Are a-Changin’: The Swinging Sixties

3. Club and Class Wars Give Way to Professionalism — the 1970s

7. Grassroots: The Game of the People for the People